WINNING AT THE GAME OF LIFE! This system explains why some people win the money, life, career, love and relationship game while others seem to struggle all the time. 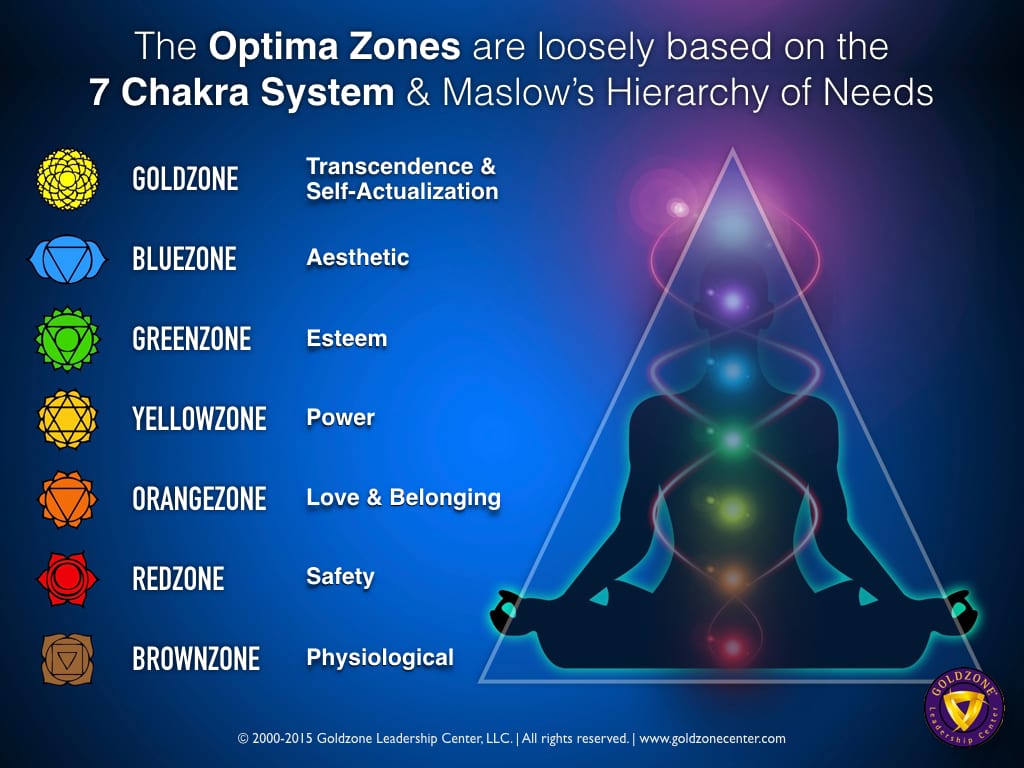 For thousands of years, human beings have pondered how we got here and what the meaning of life is.

Religion attempts to explain the unexplainable and to provide a template for successful living. Science has provided us with technologies and answers that previous generations would have considered to be heresy and yet today we accept them as a normal part of life.

The OPTIMA Zones of Human Behavior & Peak Performance were created by Andrew John Harrison and Anjou MacPherson to explain the cycle of life, why we behave the way we do and why some people are more successful, happy and fulfilled while others seem to be caught up in an endless cycle of struggle for mere existence.

The system explains why some people struggle and are unhappy, while others seem to be in the right place at the right time are happy and fulfilled. Most therapies, medical practices, and self-improvements systems focus on identifying dysfunction, treating it and becoming functional. Health is seen as the absence of disease. The OPTIMA Zones were created to look at life holistically, from the big picture, ultimate, optimum and what is possible in an ideal condition and then work backward to identify varying stages of suboptimum all the way to nonexistence. Clearly identifying where one is at versus where one could be if conditions were optimum, help to identify the best possible path to realizing the full potential in the least amount of time with the least amount of effort.

The system focuses on measuring outcomes and what creates these outcomes. Improving performance can only happen when one starts with a baseline of performance to improve. It is important to note that this is a non-religious system used by people who maintain their current religious practice (for example Christian, Hindu, Buddist, Muslim, Sikh, etc.) while using the system. In fact, many users of the OPTIMA Zones report that their current religious practice is strengthened.

All of life can be measured on a scale from FULLY ALIVE at the top to NEARLY DEAD at the bottom (death is the bottom of the scale.) We call this scale that OPTIMA ZONES OF LIFE as it is divided into seven Zones, or categories.

Each Zone is represented by a color. The colors are GOLD, BLUE, GREEN, YELLOW, ORANGE, RED, and BROWN. Each color has a specific meaning to correlate with universal emotion that is evoked and represented by various colors as well as specific behavior and results. Describing a Zone using a color makes it easy to identify and communicate the complex mechanism behind each Zone in a simple and effective way.

There are many theories of human life, emotion, and behavior that have been developed by scientists to explain and make sense of why we do what we do and what causes what to happen. Many of these theories offer conflicting explanations and are very complex for the average person to understand, let alone utilize for self-improvement.

After extensive research scouring scientific journals, articles, books, hiring consultants, participating in symposiums, educational events and one-on-one work with thousands of people, in frustration, we decided to develop our own theory that would be simple to use and apply universally to all aspects of life, career, business, relationships, health etc.

We synthesized and distilled the central essence of various scientific theories, concepts, and systems of thought and organized them into the OPTIMA Zones System.

Some of the sources include (but are not limited to) the following:

Please note: Sources include scientific as well as some traditional systems of thought that can be described as pseudoscience. We have been careful to be simultaneously skeptical and open minded to discern between rational principles that make sense and folk remedies and superstitions.

Most of us fluctuate somewhere from the top of the Zones to the bottom of the Zones, throughout the day, from day to day and year-to-year. On average, we spend most of our time in one particular place or Zone of the scale.

The scale explains a lot about human nature. You will see the entire cast of characters in your life and what you can expect from them. You will also learn a lot about yourself and why your life is working in one area and perhaps not so much in other areas.

Accompanying each Zone is a predominant emotion. Each emotion is a complete unvarying package of attitudes and behaviors. It is our emotions that drive our actions and our actions create our results.

The higher a person’s position on the Zones the better they survive. They are more capable of obtaining the necessities of living, are happier, more alive, more confident, and competent. They are winning at life.

The lower a person drops on the Zones the closer they are to death. They are losing, are less happy, less alive, less confident, less competent, and are losing at life.

A person in the GOLDZONE, BLUEZONE or GREENZONE doesn’t settle down on this scale; they maintain a high interest in and enthusiasm for living. Although they may become upset and drop down in a REDZONE environment, they are resilient and recover quickly once they are free of the lower Zone influence.

Conversely, a person in the YELLOWZONE, REDZONE or BROWNZONE can have a moment of winning or success, however, it doesn’t last long and quickly return to their original Zone.

The Optima Zones of Life:

Give Yourself a Quantum Leap

No matter how successful you are today, there are always higher levels of success and fulfillment possible. Perhaps you have excelled in one area of life and are motivated to extend this success to all areas of life without compromise? An OPTIMA Coach can help you get there faster!

Find a Coach
Scroll Up